When you book with an account, you will be able to track your payment status, track the confirmation and you can also rate the tour after you finished the tour.
Sign Up

Or Continue As Guest

When you book with an account, you will be able to track your payment status, track the confirmation and you can also rate the tour after you finished the tour.
Sign Up
920
3 DAYS/2 NIGHTS
Availability : every weekend (from Friday to Sunday) until 31/12/2021
Benevento
Max People : 50

Few Italian cities can boast a historical and cultural heritage like Benevento: probably founded by the Osci with the name of Maloenton, it was then dominated by the Samnites, the Romans (who renamed it Maleventum and, later, Beneventum), the Lombards (who, in turn, founded the duchy of the same name), and then became a papal enclave in the Middle Ages. The Samnite capital is a city that can be defined as an “open-air museum” enhanced by the many architectural beauties that these great civilisations of the past have left behind: splendours that are concentrated in the historic centre of Benevento, within easy walking distance of each other. A visit to Benevento is an authentic journey through history: from the time of the dinosaurs to the most current and contemporary evolution of western artistic civilisation.

Early afternoon arrival by own means in Benevento. Check-in at one of the booked accommodation facilities, delivery of the “Welcome Sannio” kit (shopping bag, map of the area, discount vouchers in partner shops, souvenir gadgets), and accommodation in reserved rooms. Afterwards, meet at 15:30 with a local tour guide at the entrance to the Metropolitan Cathedral of Santa Maria de Episcopio, where our tour will begin. Visit to the basilica, the city’s cathedral, which was almost completely destroyed during the Allied bombings of 1943: only the bell tower, the façade and the crypt with its frescoes, as well as the 12th-century bronze door, the Janua Major, consisting of 72 panels with bas-reliefs, remain. Of great artistic value, it was considered by the art historian Adolfo Venturi as “the greatest sacred poem of the Romanesque age in Southern Italy”. Directly behind the cathedral is the oldest area of Benevento: theTriggio district, characterised by the presence of the ancient Roman baths and the Arco del Sacramento, one of Benevento’s eight Roman gates. In addition to the historic buildings and characteristic narrow streets, in the middle of the district stands the ancient Roman Theatre, which is well worth a closer look. Beyond the theatre is a special place: the Morticelli cemetery.A Dominican abbey once stood here, but after the disastrous earthquake of 1688, the place was used as a cemetery for children. The end point of the Triggio district is Port’Arsa, another of the city’s eight gates, incorporated into the ancient Lombard walls. Dinner at a local ristopub in a characteristic location steeped in history. Return to the host facility and overnight stay.

At 9:30 a.m., after a hearty breakfast, meet your guide in front of the Rocca deiRettori: also known as Benevento Castle or Manfredi Castle, it was founded on the site of an earlier fortified Lombard palace, built by Duke Arechi II in 871. The palace survived even after the end of the Duchy of Benevento, hosting several popes over time, the last of which was Pope Gregory X, in 1272. The gardens next to the castle are worth a visit. They contain a lapidary dedicated to the milestones of the Traiana Street and various Roman architectural fragments, as well as offering a marvellous view of the entire area below. Then, a few steps from the Rocca, a relaxing stroll through the green heart of the city: the Villa Comunale. Built between 1875 and 1880 to a design by Alfredo Dehnardt, then director of the Naples Botanical Gardens, the villa has harmonious lines that follow the natural conformation of the site, with spaces organised along apparently spontaneous paths in the style of English gardens. The lawns, flower beds and pond, flowers and plants are all parts of a complex design that aims to give the illusion of a natural landscape as opposed to the artificial one of the city. A real natural “forest” where you can walk in perfect harmony with the colours and sounds of nature. To round off the morning we visit the ARCOS museum, located in the basement of the Palazzo del Governo, which houses a section of contemporary art and a very rich section of Egyptian artefacts, all found on site and dating back to the cult of the goddess Isis, in whose honour a temple was erected in Roman times; this vast collection makes Benevento unanimously recognised as the largest centre of Egyptian finds outside Egypt. Afterwards, lunch at a historic restaurant in the area, where we can taste typical local specialties. At the end, we will gently walk-up Corso Garibaldi to reach the monument that is the symbol of the city: the imposing Arch of Trajan. Built between 114 and 117 AD, it was erected to celebrate the figure of Emperor Trajan on the occasion of the inauguration of the Via Traiana, a variant of the Via Appia that shortened the route between Benevento and Brindisi. Trajan is remembered as ‘Optimus’, an enlightened prince whose fame has remained intact to this day, so much so that Dante himself placed him in Paradise, a testament to his undisputed greatness. Opposite the Arch we find the deconsecrated church of Sant’Ilario a Port’Aurea, presumably of Lombard origin (6th-7th century), built on previous ruins. This church, located in the middle of a green meadow, is characterised by a bare and unpaved interior, allowing the view of the structures underneath the building through a suspended walkway connecting the two entrances. At the end of the walk, up a few dozen metres along Corso Garibaldi, we visit the extraordinary Monumental Complex of Santa Sofia. The complex includes the church, one of the most important of Langobardia Minor, the bell tower in front of the square, the former monastery with its picturesque cloister, and the fountain in the centre of the area. Since 25 June 2011 the Church of Santa Sofia, which is part of the serial site “The Lombards in Italy: places of power (568-774 AD)”, has been on the UNESCO World Heritage List. At the end of the day, dinner in a local restaurant, return to the host facility and overnight stay.

Waking up with a delicious breakfast. Possibility of one of the following experiences:

THE PRICE INCLUDES: “Welcome Sannio” kit, accommodation in a host structure of your choice with breakfast included, visit of the historic center with a local guide, meals as per program, medical luggage insurance and cancellation.

THE PRICE DOES NOT INCLUDE: transfer by car from the main railway and airport stations, drinks with meals, any activities of your choice to be carried out on day 3, entrance fees*, tips, extras and anything not mentioned in “the price includes”.

BOOK WITHOUT THOUGHTS: free cancellation, for any reason, up to 15 days before departure.

NB The planned visits can be reversed between the various days depending on the opening hours of the museums or for technical needs, but the program remains unchanged.

Notes for booking: up to 7 days before departure free purchase, from 7 until departure on request. 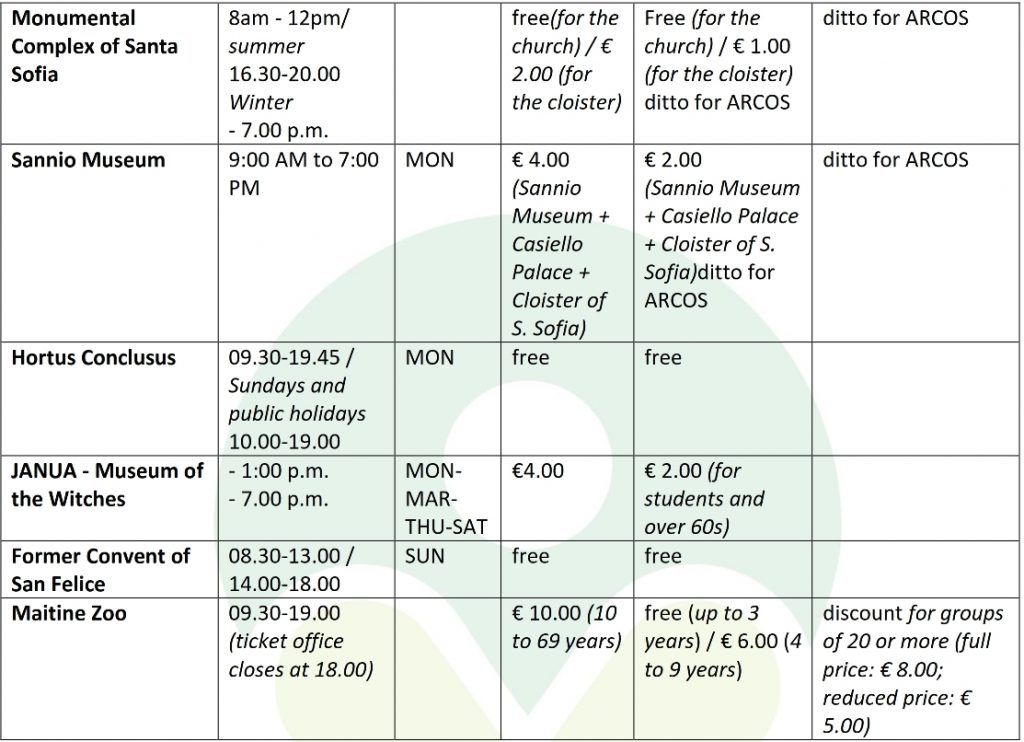 RECOMMENDED FOR: singles, couples, families with children, and groups of friends.

From€525
0
RECOMMENDED FOR: singles, couples, families with children, and groups of friends.

From€250
0
RECOMMENDED FOR: singles, couples, families with children, and groups of friends.